Posted on October 3, 2011 by Diner Dialogues

Back in the day, farmers farmed and shoppers shopped and, there were many middle men and little interaction between the two.  Fortunately for those of us who care about what we feed our families and like knowing where our food comes from that has started to change for many Americans.

Farmers increasingly see that part of their farm work is, in fact, to educate the public 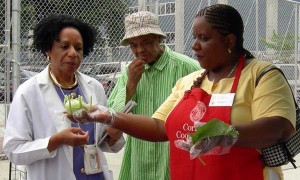 about who they are, what they do, and why it matters.  And from a business standpoint they are right about this.  As the late off-price retailer Sy Syms, so famously put it, “An educated consumer is our best customer.”  The explosion of farmers markets around the country is testament to the desire for more connection by both farmer and consumer. So are the many new locavore restaurants and the number of farmers now selling right off their farms.

On the macro scale there is the recent debut of the US  Farmers and Ranchers Alliance, obviously well funded given the full page NY Times ad and multiple snazzy websites.  This alliance of “agricultural groups at the national, regional and state levels,” founded it seems in reaction to the public response to films like Food, Inc  and books like The Omnivore’s Dilemna, is offering  to “lead the dialogue and answer Americans’ questions about how we raise our food,” according to their Food Dialogues site. One hopes they are willing to listen to the dialogue that is already in full swing at local farmers markets, farm stands and in communities around the country.

Here in the Hudson Valley there are a number of farms for whom education has always been part of their mission. In Poughkeepsie alone, both the  Poughkeepsie Farm Project, with its community focus, and the 200 acre Sprout Creek Farm highlight education as part of their mission. Since 1982, Sprout Creek Farm, through summer camps and year-round programming, has been welcoming children and families — including my own — to “provide educational experiences for children and adults that will foster appreciation for, and understanding of, our place within the natural world…” And they do it well.

Don Lewis of Wild Hive Farms in Clinton is ever the educator.  The man knows more about grains than anyone. In addition to his cafe (which is also home to the world’s smallest, and most adorable, library), he recently acquired a mill down the road with the goal of creating an interactive learning center with classes and milling demonstrations.

Perhaps the Hudson Valley’s most impressive example of “farm ed” has been happening for 40 years — often below the mainstream radar screen — at the 400 acre biodynamic Hawthorne Valley Farms in Ghent.  The farm is part of the Hawthorne Valley Association which spells out its commitment to Education, Agriculture and the Arts as part of its full name. In addition to a K-12 Waldorf School with 200 children right on the grounds, Hawthorne Valley offers extensive training programs and apprenticeships in farming — and soon in the bakery and creamery; workshops, classes and teacher training on subjects from biodynamics to forging musical instruments, from cheese-making to a weekend conference on Rudolf Steiner’s World Economy.

In addition, Hawthorne Valley Farms regularly welcomes school visits from students who come from as near as Hudson and as far as New York City.  They take their expertise on the road and provide in-school talks on any farm related subject for kids from kindergarden through high school.  And they offer after-school classes — working with local agencies to provide limited transportation to the farm —  in cooking, farm work, and land-based crafts.

All these farms are committed to connecting local communities to the farmers that feed them and the food that nourishes them. At Hawthorne Valley Farms they count on both the farmers and the food products, as they say, “to open an educational dialogue about our environment, our economy, and ourselves.”  To get a first hand look at Hawthorne Valley Farm’s pioneering work you can visit their 17th Annual Fall Festival on Sunday, October 9 from 10 am to 4 pm, rain or shine.

Didi Barrett was elected to the New York State Assembly in a special election in March 2012 and re-elected to a full term in November 2012. Her district, the 106th AD, covers some of the most beautiful parts of Columbia and Dutchess Counties. She has deep roots in the Hudson Valley and came to elected office after a career as a community activist, writer and longtime leader of not-for-profit organizations. Didi is passionate about the agricultural, natural, cultural and historic resources of the Hudson Valley and their critical importance as economic engines and job generators. She is also a great fan of the iconic diners that dot the region. As a member of the Assembly she serves on the Committees on Aging; Agriculture; Economic Development, Job Creation, Commerce and Industry; Mental Health; Tourism, Parks, Arts and Sports Development and Veterans Affairs.
View all posts by Diner Dialogues →
This entry was posted in Didi's dish and tagged Hawthorne Valley Farms, Poughkeepsie Farm Project, Sprout Creek Farm, US Farmers and Ranchers Alliance, Wild Hives Farm and Cafe. Bookmark the permalink.