It’s official!  All the absentee ballots are counted and the results certified.  We can now truly say we have WON the March 20th special election.  The people 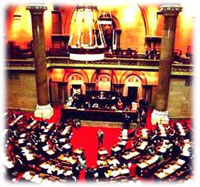 have spoken and we have nearly doubled our lead since election day. I am so very thrilled and honored to be representing the people of the 103rd District in the New York State Assembly, the People’s House. And I’m ready to get to work.

Thank you to all the voters of Dutchess and Columbia Counties who made sure their voices were heard on election day.  I pledge to be sure your voices are heard just as loud and just as clear in the halls of Albany.  I pledge to be your full time legislator. And I will fight full time for our middle class families, for good paying local jobs, and for tax and mandate relief for our schools and communities.

The  Hudson Valley is one of the most beautiful, historic and diverse regions in the country. I so look forward to sharing my passion for this region with my colleagues in the legislature.  And I am committed to helping us realize the potential of our outstanding agricultural, natural, cultural and historic resources as economic engines and job generators for the state.

This historic election is the result of extraordinary teamwork.  Hats off to our marvelous Campaign Manager Thomas Scaglione and Field Director Rohan Parikh — both products of public high schools in the 103rd Assembly District, by the way. They were energetically supported by the chairs — Elisa Sumner and Cyndy Hall —  and members of both the Dutchess and Columbia Democratic Committees, our sisters and brothers in Labor and dozens of volunteers who worked tirelessly phoning and ringing doorbells — yes, I know, sometimes it felt like too many times.

But the task was daunting: Reaching out to thousands of voters in the twenty-two municipalities across two counties that make up this district, all that in less than two months.   And despite a voter enrollment disadvantage, we won! We elected the first woman, and the first Democrat in anyone’s memory — perhaps ever —  to represent the eastern side of Dutchess and Columbia Counties.

Thank you from the bottom of my heart to all of you who worked, contributed,  sent emails and letters, reached out to friends, cheered from the sidelines, sent good wishes. It was truly a team effort and it all made a difference.  Come visit in Albany.  My door will always be open.

Didi Barrett was elected to the New York State Assembly in a special election in March 2012 and re-elected to a full term in November 2012. Her district, the 106th AD, covers some of the most beautiful parts of Columbia and Dutchess Counties. She has deep roots in the Hudson Valley and came to elected office after a career as a community activist, writer and longtime leader of not-for-profit organizations. Didi is passionate about the agricultural, natural, cultural and historic resources of the Hudson Valley and their critical importance as economic engines and job generators. She is also a great fan of the iconic diners that dot the region. As a member of the Assembly she serves on the Committees on Aging; Agriculture; Economic Development, Job Creation, Commerce and Industry; Mental Health; Tourism, Parks, Arts and Sports Development and Veterans Affairs.
View all posts by Diner Dialogues →
This entry was posted in Didi's dish. Bookmark the permalink.