I am often asked in the one year since I was elected to the New York state Assembly: “How is it in Albany? Is it what you expected?”

My honest answer is that I truly had no expectation of what it would be like to work in Albany.

My motivation for serving in the state Legislature has always been twofold: To be an advocate for the beautiful, naturally and culturally rich Hudson Valley, a region I am so fortunate to represent, and to be a role model to encourage other women and girls to step up and run for office, ensuring the voices of women are always heard in the places decisions are being made.

The fact is that even in 2013 in New York state, the state that put women’s rights on the 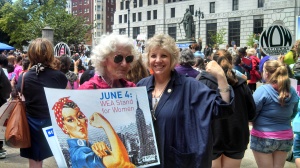 Didi and Doris Kelly at WEA rally in Albany

map, women’s voices are still far too rare. Women currently make up only 22 percent of the members of the New York state Legislature. U.S. Sen. Kirsten Gillibrand, D-N.Y., is the only woman elected statewide. And while state Sen. Andrea Stewart-Cousins’ recent election as Leader of the Senate Democratic Conference made her the first woman to head a legislative conference in New York, too much of the control of state government still remains firmly in the hands of the storied three — or sometimes four — men in a room.

Even with no expectations, these last few months in the state Legislature have been challenging to say the least. I knew Albany’s reputation for dysfunction, and I’m committed to helping to change that. But the spate of recent news — corruption schemes, indictments, wired legislators and predatory behavior — has been staggering.

As a lifetime advocate for women and girls, I am particularly outraged by the blatant sexual harassment by former legislator Vito Lopez and angered that the young women involved have become unwitting pawns in any number of different political agendas.

I am proud to be a public servant, and I wish for the next generation of girls and young women to look to public service and elected office as worthy career paths.

I, like others, ran for the state Assembly in part to make sure that issues impacting women and families are addressed — safe communities, education, economic development, clean environment, child care, senior services, food justice and health care. Further, I feel an obligation to help assure that women working in and for the Legislature operate in an environment in which they feel safe, productive and professional. Simply put, we need more women in local, state and federal office. I know firsthand that most institutions work better when there are women at the table and I believe that Albany’s culture will improve with more women in elected office.

We all know that change comes slowly. But I came to Albany to make a difference and I remain committed to meaningful reform: Greater transparency in all parts of government, independent redistricting and real campaign finance reform. There is much work to be done and I hope the remaining weeks of the 2013 session will continue to be productive. I was thrilled when the governor made the Women’s Equality Agenda a highlight of his State of the State message in January. I look forward to working with him to pass landmark legislation that moves the women of New York State forward on all 10 points of his agenda. And then I hope more women will step up and be the change we all want to see.

Didi Barrett was elected to the New York State Assembly in a special election in March 2012 and re-elected to a full term in November 2012. Her district, the 106th AD, covers some of the most beautiful parts of Columbia and Dutchess Counties. She has deep roots in the Hudson Valley and came to elected office after a career as a community activist, writer and longtime leader of not-for-profit organizations. Didi is passionate about the agricultural, natural, cultural and historic resources of the Hudson Valley and their critical importance as economic engines and job generators. She is also a great fan of the iconic diners that dot the region. As a member of the Assembly she serves on the Committees on Aging; Agriculture; Economic Development, Job Creation, Commerce and Industry; Mental Health; Tourism, Parks, Arts and Sports Development and Veterans Affairs.
View all posts by Diner Dialogues →
This entry was posted in Didi's dish and tagged Hudson Valley, New York State Assembly, Sen. Andrea Stewart-Cousins, Sen. Kirsten Gillibrand. Bookmark the permalink.